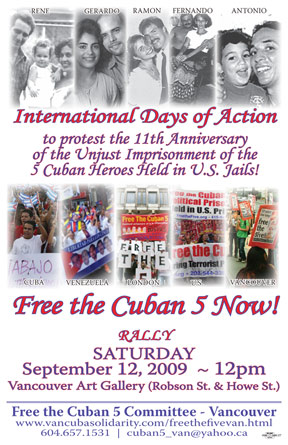 Two events Held in Vancouver, Canada Joining the International Actions to Protest the 11th Year of Unjust Imprisonment of the 5 Cuban Heroes

September 12th 2009 marked the 11th anniversary of the unjust imprisonment of Gerardo Hernandez, Ramon Labaino, Antonio Guerrero, Rene Gonzalez and Fernando Gonzalez, known internationally as the Cuban 5 heroes. Peace and human loving people around the world gathered on this cruel anniversary to demand that the U.S. government immediately free these 5 Cuban Heroes from prison.

In Vancouver , Canada , two events marked this important date. The first was a forum on September 9th titled, 11 Years of Injustice: Why the Antiwar Movement Must Defend the Cuban 5 - Political Prisoners Held in US Jails which was presented by the anti-war organization Mobilization Against War & Occupation (MAWO).

The forum began with an introduction by MAWO co-chair Janine Solanki. Following Janine was a film entitled Septiembres y Mas that outlined the history of US sponsored terrorism against Cuba over the past 50 years. After the film, Tamara Hansen, coordinator of Vancouver Communities in Solidarity with Cuba (VCSC) and co-chair of the Canadian Network on Cuba (CNC), outlined the history of Cuba, from the challenges it has faced as a colony of Spain to the present US terrorism against the Cuban people. Nita Palmer, MAWO executive member and editorial board member of the Fire This Time newspaper, emphasized the importance of the Cuban 5 in the antiwar movement. She explained that the Cuban 5 are pillars in the fight for self-determination, not only for Cuba but internationally.

On September 12th, the date that marked the 11th anniversary of the imprisonment of the Cuban 5, over 100 peace loving people from many different communities joined with the Free the Cuban 5 Committee Vancouver for a protest rally in Downtown Vancouver to demand the immediate release of our Cuban 5 heroes.

Sarah Alwell, coordinator of the Free the Cuban 5 Committee Vancouver, MCd the program and introduced the rally by explaining the importance of the international day of action as well as the growing international campaign to free the 5 Cuban heroes.

Tamara Hansen, Co-chair of the Canadian Network on Cuba (CNC) described the long history of anti-Cuban terrorism organized in Miami- which the 5 were sent to Miami to investigate- and specifically condemned Luis Posada Carriles for his role in the bombing of a Cuban airliner that killed all 73 innocent people on board.

Vancouver protesters also received warm greetings of international solidarity from Alicia Jrapko, coordinator of the International Committee for the Freedom of the Cuban Five, Gloria La Riva, coordinator of the National Committee to Free the Cuban Five in the U.S, both of whom spoke via telephone from the California Bay Area. The rally also received a message of solidarity from Jorge Soberon, the Cuban Consul General in Toronto, Canada.

The program also featured a heartfelt array of poetry read by supporters of the 5 in Vancouver . Poets included Dillia Ochoa, Seonaid Lamb and April Desilets.

Throughout the rally over 120 postcards were signed to bring this case to the attention of US President Barack Obama saying, "Yes we can! Free the Cuban 5!" The rally came to a passionate finish with long chants of free the Cuban 5 Now! as protesters vowed to continue to organize and intensify the campaign for the freedom of our Cuban 5 heroes. 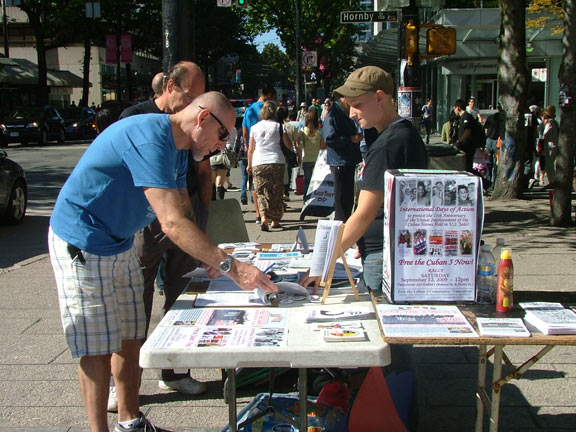 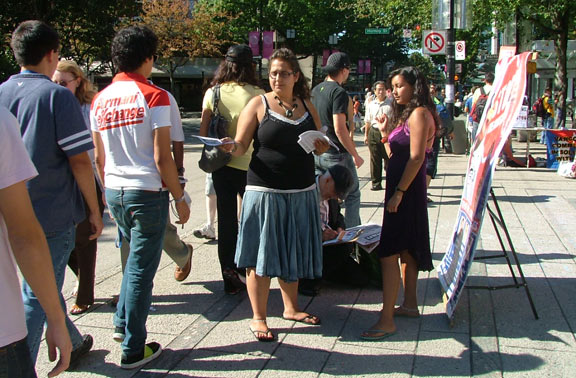 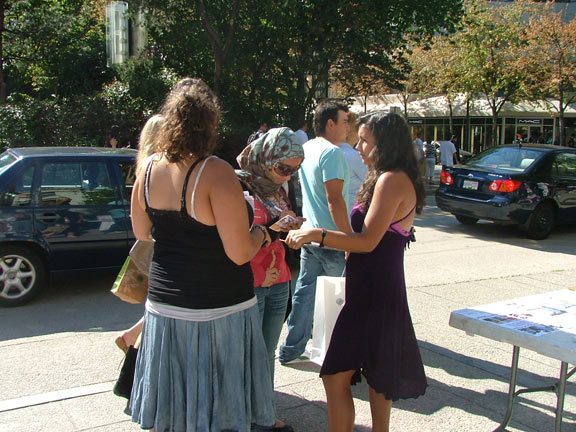 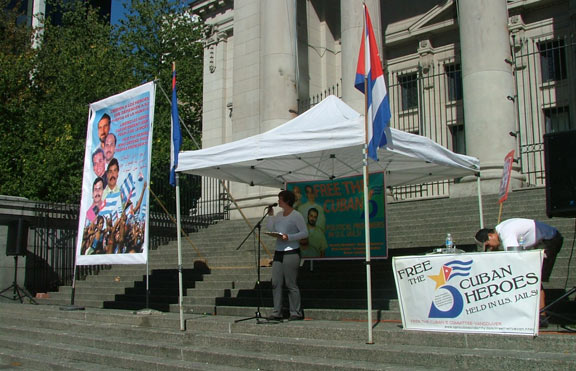 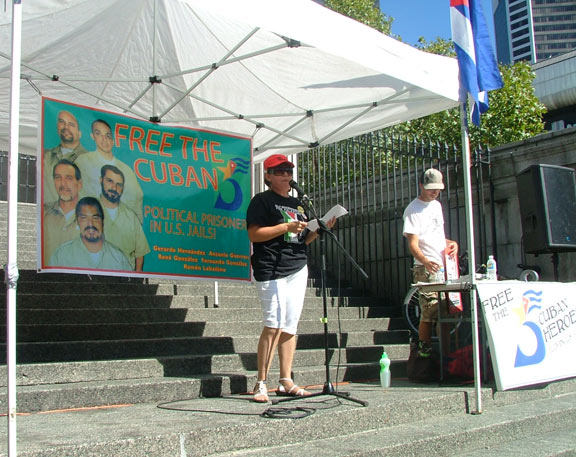 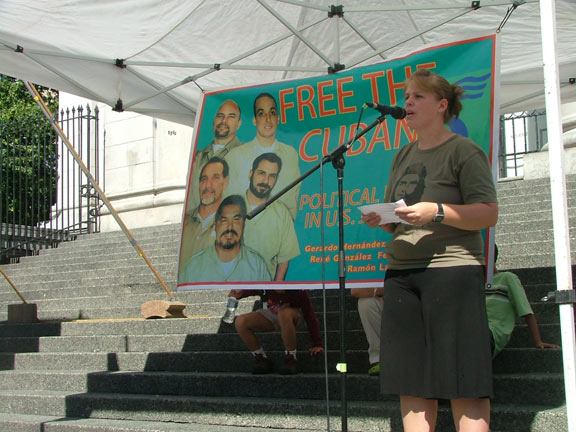 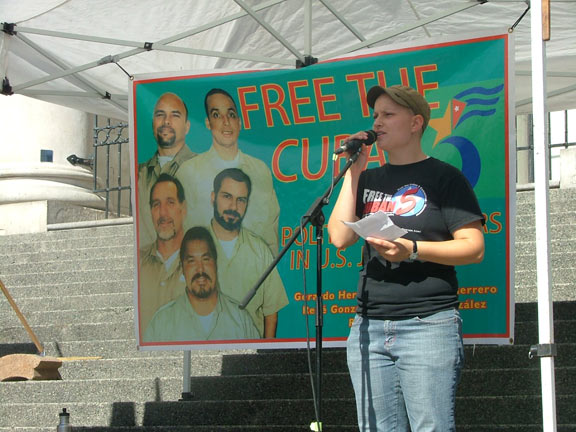 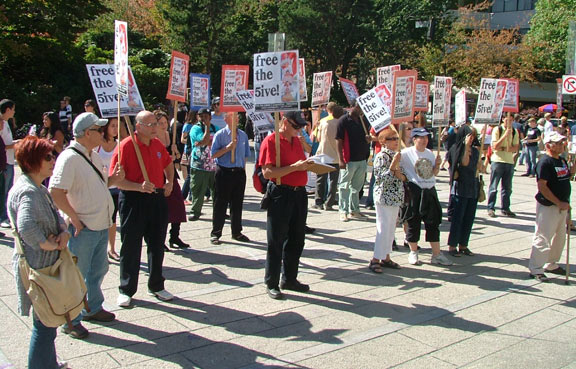 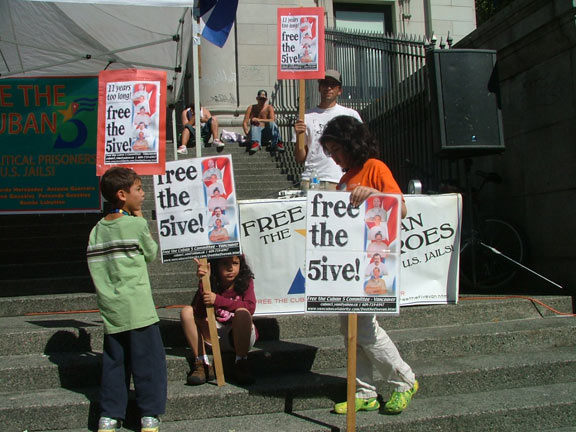 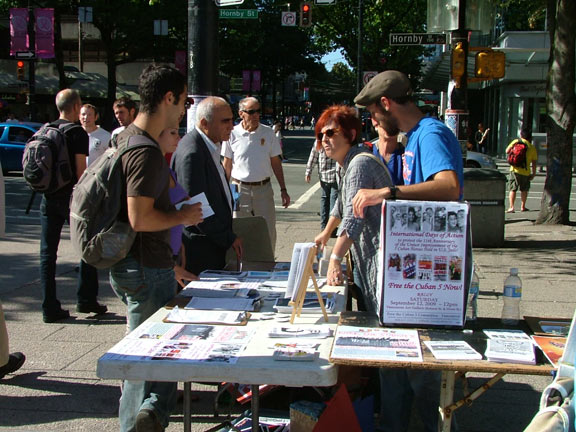 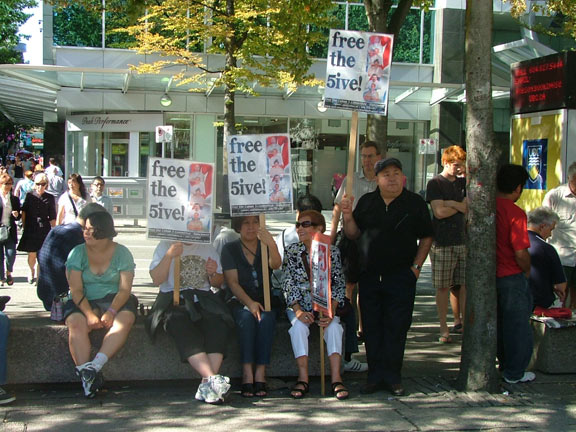 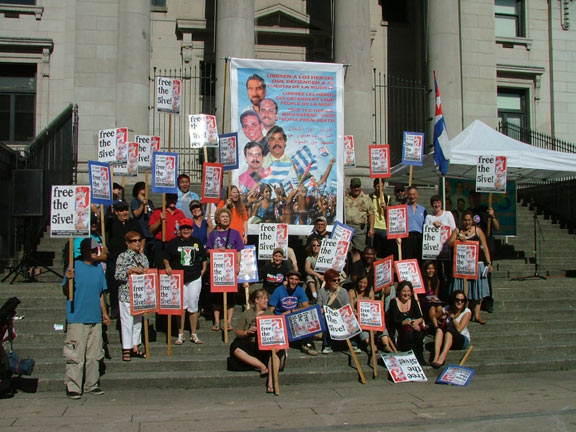